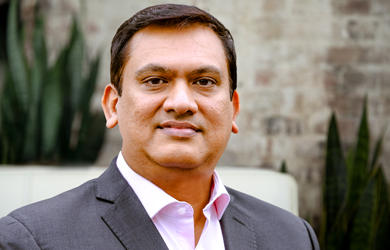 Sudhir Nair is a technology and digital operations leader and a distinguished speaker who has more than 25 years in various technology and operations leadership roles. He has served as a CIO, CTO and COO for a variety of Fortune 100 companies for a diverse array of sectors, including banking and finance, retail (FMCG & CPG), online/eCommerce and technology.

Before joining loanDepot, Sudhir served as Executive Vice President and CIO of Solutionstar/Xome, where he was instrumental in launching the first real estate marketplace, Homesearch.com/Xome.com. He also helped implement the company’s technology stack entirely on Cloud, Mobile and data analytics, a first of its kind in the banking and financial services industry.

Prior to joining Solutionstar, Sudhir served as a technology executive with Bank of America, during which time he held several leadership roles in consumer real estate and banking. During his ten-year tenure, he was instrumental in launching the company’s web-based loan origination system, and also led the largest merger integration and conversion of mortgage servicing technology in the industry, managing a global team supporting the servicing of 16.3 million mortgages, the largest servicing portfolio in the United States.

Sudhir has a Bachelor’s degree in Computer Science Engineering from University of Madras, India and a Master’s degree in Systems and Information from Birla Institute of Tech & Science, Pilani-India. Sudhir also is a graduate of Harvard’s management program.