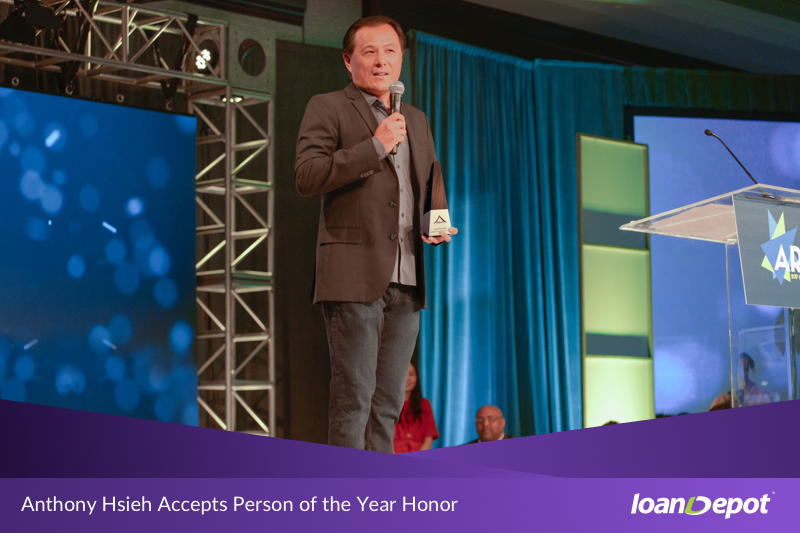 Today was a historic day as our CEO and Chairman Anthony Hsieh was honored in front of more than 1,200 attendees at the Asian Real Estate Association of America’s (AREAA) national conference with its Person of the Year award. “The courage of immigrants is so unique – it allows us all to have a greater appreciation of our opportunities and of this wonderful nation. My journey is far from being over; I wish each of you the best on your personal journeys.”

Before an esteemed crowd of industry veterans and notable names, AREAA President Angie Lee introduced Anthony to a standing ovation in the ballroom. “Anthony Hsieh, CEO and Chairman of loanDepot, is credited as the architect of modern consumer lending and has more than 30 years’ success driving lending’s evolution into the digital age,” she said as she welcomed him to the stage. “We can think of no more deserving person for this prestigious award than Anthony Hsieh.”


At loanDepot, we’re immensely proud to carry forward and deliver on one man’s vision of the future of modern lending. Team loanDepot stands in salute with hearty congratulations on this historic honor.

The AREAA Person of the Year award is an honor recognizing individuals for their notable accomplishments, which align with the organization’s goals of homeownership within the Asian American Pacific Islander community.
Previous recipients of the Person of the Year honor include: