Foreclosures and home loan delinquencies fall to lowest level since 2007 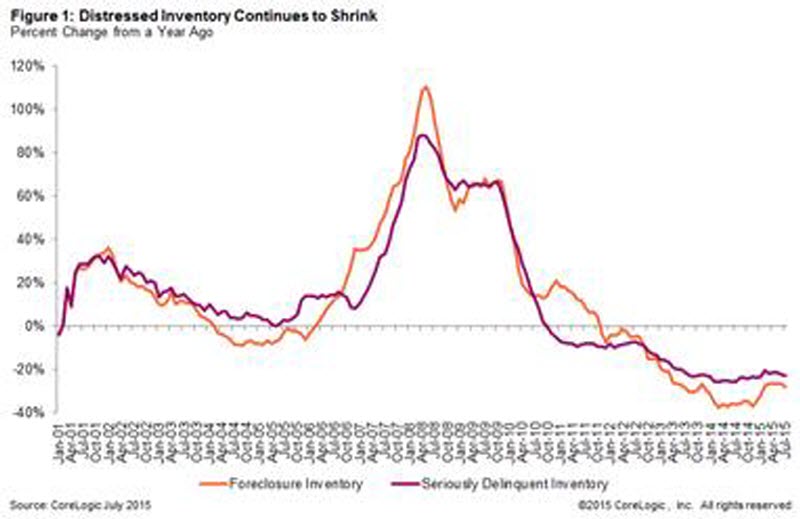 The nation’s foreclosure rate and the number of homeowners  seriously delinquent on their home loans fell to the lowest rates since 2007, a new report from CoreLogic said.

CoreLogic’s  National Foreclosure Report July 2015, which was released Sept. 8, 2015, said the rate of seriously delinquent home loans – those classified as 90 days or more past due, including those pending foreclosure – hasn’t been this low since December 2007.

Nearly 6 million homeowners have lost their homes to foreclosure since the financial crisis began in 2008.

"Job market gains and home-price appreciation helped to push serious delinquency and foreclosure rates lower. The CoreLogic national HPI showed home prices in July rose 6.9% from a year earlier, building equity for homeowners," said Frank Nothaft, chief economist for CoreLogic in a company statement. "Further, 2.4 million jobs were created, pushing the unemployment rate down from 6.2% in July 2014 to 5.3% this July and supporting family income growth for most owners."

Though the numbers of foreclosures are declining substantially, it is still taking many states longer to process foreclosures still in the pipeline. In fact, the Federal National Mortgage Association last week increased the amount of time considered acceptable for the foreclosure process in a majority of states. The Washington, D.C.-based entity said on Sept. 3, 2015, that the maximum number of allowable days for routine foreclosure proceedings has been extended in 33 states. The extended time frames apply to foreclosure sales of Fannie Mae-backed mortgages that occur on or after Aug. 1, 2015. If the number of actual days to complete the foreclosure proceedings exceeds the maximum number of allowable days, Fannie Mae can require the mortgage servicer to pay a compensatory fee.

Other highlights from the CoreLogic report include:

If your loan is currently with loanDepot and you are having trouble making your mortgage payment due to change or loss of your job, serious illness, divorce or other difficult situations, loanDepot may be able to work with you to avoid foreclosure. For more information, visit our Homeowner Support Resource page for information.