The Inaugural War Heroes on Water Fishing Tournament took an emotional and memorable turn this weekend as the Southern California fishing community, event donors and support crew received an unexpected and invaluable gift from the Veterans themselves: The opportunity to witness—and share—in the event of a lifetime. 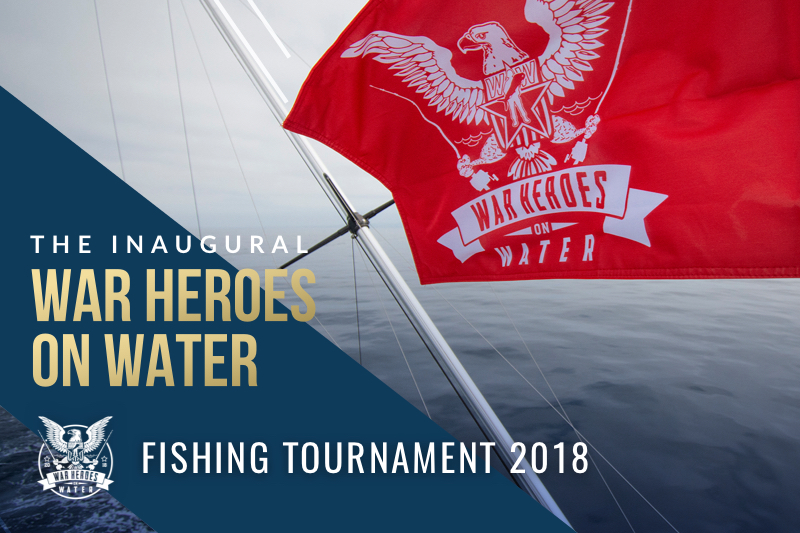 The Inaugural War Heroes on Water Fishing Tournament took an emotional and memorable turn this weekend as the Southern California fishing community, event donors and support crew received an unexpected and invaluable gift from the Veterans themselves: The opportunity to witness—and share—in the event of a lifetime.

“Our goal was to give these brave and selfless heroes the weekend of a lifetime, but as it turns out, that’s also what they gave to us in return,” said CEO Anthony Hsieh, whose vision a year prior set in motion the events that brought the Tournament to fruition. “I am confident that every person who participated in the Tournament returned forever changed in a profound way. The event was at turns uplifting and joyful and yet deeply emotional, it was that special.”

When the 27 combat wounded heroes arrived in Southern California on Thurs., Aug. 16th, every detail of the weekend’s event had been in planning for months to ensure that every Vet had an exceptional experience. From the prelude reception held at Hsieh’s private Newport Beach residence, to the Tournament fishing expedition, to the pre- and post-Tournament celebrations held aboard the Tournament’s base camp and one of Hsieh’s yachts, Bad Company 144, the Vets were celebrated with thoughtful consideration for their comfort and care.

Twelve yacht owners (including Hsieh) donated their boats and crews to take the Veterans fishing. Their captains—storied men with decades of fishing experience in the waters surrounding Santa Catalina Island and beyond—willingly donated their time and skill. Support staff eagerly volunteered to help with the event—from chefs cooking elegant meals during the Tournament, to staff assisting with all aspects of Tournament operations, to land-based event support to ensure everything went off without a hitch.

Moved by the sentiment behind the Tournament, donations poured in from across the country, with fishing supply manufacturers providing Vets with an array of state-of-the-art fishing gear. Generous donors outside the fishing community stepped up to help with fundraising efforts, donating drool-worthy fishing trips, luxury vacations, exquisite artwork and much more for the charity silent auction that was held at the reception. As a result of their gracious gifts, the auction raised more than $80,000 on top of the money raised to fund the Tournament. The money, donated to Freedom Alliance, will go to support wounded Veterans and their families as well as fund scholarships for children of soldiers killed or wounded in action.

Josh Miles, Director of Military Programs for Freedom Alliance, echoed Anthony’s sentiments. “The War Heroes on Water event is the model of patriotic Americans making a tangible and meaningful difference in the lives of Veterans and their families. Speaking with many of the Veterans involved in the event, they all expressed sheer amazement at the outpouring of generosity from the fishing community, boat owners and event sponsors. For many of the Veterans, the event was more than they ever dreamed and all left deeply touched. Many new friendships were made this weekend and a unique bond between Veterans and complete strangers was forged. For Freedom Alliance, the support of all those involved was beyond impressive. We thank Anthony Hsieh for his leadership, the entire team for their hard work, and the event donors for their immense generosity which supports not only the troops who were at the event but thousands of military families, in addition to providing scholarships for the children of service members killed or wounded in action. Those who gave their time, money, and effort to make this event happen stepped into the arena to truly change lives.”

At the Tournament’s closing ceremonies, many took the mic to share how the event had profoundly affected them. Steve Lassley, Captain of Bad Company 92, one of the event’s participating yachts, offered a sentiment shared with many who were in attendance: “It has been the greatest honor,” he said with tears in his eyes. “to be a part of this event and to meet all of you. You have done so much for us and our families. You have sacrificed so much and so greatly, without asking a thing of us. I thank you. We all thank you.”

For the Veterans themselves, the weekend was action-packed. From the moment they arrived and were transported to Hsieh’s home to the moment they returned for transport home, the days were filled with memories. On Sunday, when they all gathered to talk about their experiences, the air quickly fills with fish stories—both about the ones that were caught and even more about the ones that got away. Lit up with excitement, the joy of the entire experience is plainly seen across everyone’s faces. Whether they caught a lot or a little, for the Tournament participants, the experience was a dream come true. Here is how it played out:

The day following the Prelude Reception, the 27 Veterans boarded 11 elite sportfishing yachts, with Hsieh’s Bad Company 144, the largest sportfisherman in the world, joining to serve as home base and to provide continued support throughout the Tournament. The group journeyed to the pristine waters surrounding Santa Catalina Island, which are considered the origins of modern day sportfishing, and to this day remain the epicenter of some of the best fishing in Southern California. There, the captains and crews spent the day sharing their knowledge of the waters, the native fish species and the techniques they use to lure and catch the local fish. Friday concluded with a colorful celebration aboard Bad Company 144, with country singer Colton James performing songs from his latest album as the Veterans, Captains and crew gathered to review the Tournament rules and dine on locally sourced delicacies.

On Saturday morning, the LAPD Color Guard boarded the host yacht Bad Company 144 to display the colors as Colton James sang the National Anthem. All participating yachts, along with many boats from nearby Avalon Harbor, surrounded the 144 to watch the festivities. As the last refrains of the National Anthem echoed across the water, the War Heroes on Water Fishing Tournament began in earnest.

For the next two days, the Veterans fished with their local experts in an attempt to catch Calico, Rockfish, Halibut, Yellowtail Tuna, Bluefin Tuna, Dorado, White Sea Bass, Marlin and Swordfish. Each species earned qualifier points based on size and weight. While the event was designed to be a friendly competition, prizes were awarded to the anglers who scored the most points in each species; the angler with the highest overall qualifier points; the angler with the highest overall weight points; high overall angler and high overall team.

At the conclusion of the Tournament, the Veterans and their teams had caught 208 qualifying species, with a total of 1,287 lbs. of total qualifying weight. The teams caught: 92 Calico, 88 Rockfish, 1 Yellowtail, 1 Yellowfin Tuna, 8 Bluefin Tuna and 15 Dorado.

The winners of the WHOW Tournament were:

The event concluded on Sunday evening on Hsieh’s Bad Company 144 with a dramatic closing ceremony that included a flyover by three vintage WWII planes and a send-off performance by Colton James. The Veterans were celebrated with delicacies created by Chef David Trailor, including many dishes that featured freshly caught fish from the weekend’s event. In addition, all of the participating Veterans were provided coolers filled with iced or frozen fish from the Tournament to take home to share with family and friends.

Said Tournament Director Rod Halperin about the event, “We could not be more proud of all of our supporters who helped us make the event happen, and could not be more grateful to these veterans and the many thousands more who willingly put themselves in harm’s way to protect our freedom. These are America’s finest and it has been our honor to serve them. We can never thank them enough, but we will continue to do our best to show our appreciation for what they have done for our great country.”

*Sadly, the 300 lb. Bluefin tuna did not make it onto the boat. But the Veteran who almost brought it in has the story of a lifetime.