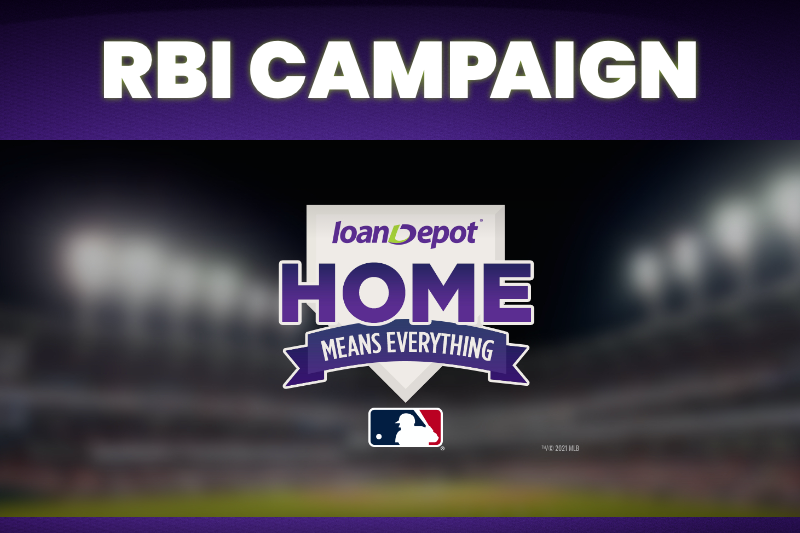 For loanDepot, “Home Means Everything.” As the Official Mortgage Provider of Major League Baseball®, that includes home plate where games are decided and players celebrate. For many kids around the country, it means their second home at a local Boys & Girls Club of America location. To celebrate baseball season and assist millions of youth around the U.S., the nation’s second largest nonbank retail lender launched its “Home Means Everything” RBI campaign in support of national and local youth and teen initiatives, with a goal of bringing more than $500,000 to Boys & Girls Clubs of America. loanDepot led off the MLB® season-long campaign with an Opening Day activation by donating $250 for each of the 125 Opening Day Runs Batted In (RBI) across the league. This led to a donation of $31,250 for one day of RBI alone, with six more months of the season still left to play. The donation was presented during a virtual check presentation, which can be viewed here.

“Runs batted in is a big stat with big numbers,” said MLB Network® Host and Reporter Scott Braun, who served as emcee for loanDepot’s virtual check presentation ceremony. “In the last full season, which was 2019, there were 22,471 total RBI—a lot of runs scored in Major League Baseball.”

“We take great pride in giving back to our communities, and we are proud to support Boys & Girls Clubs of America in their continued efforts to provide a safe, positive and inclusive environment for youth and teens nationwide,” said loanDepot EVP, Chief Administrative Officer, TJ Freeborn. “To pair America’s favorite pastime with America’s Lender to support the communities in which we live and work is just a natural fit for us.”

With more than 20,000 RBI during an average MLB season, the “Home Means Everything” campaign has the potential to generate a donation of more than half a million dollars by the season’s close—all in the spirit of players bringing their teammates home. Of the season-long donation, half will be allocated to the Atlanta-based national Boys & Girls Clubs of America organization, while the other half will be donated to Clubs located in areas where many members of Team loanDepot live and work: Boston, Chicago, Dallas, Detroit, Orange County, CA, Miami-Dade, Nashville and Phoenix.

As the Presenting Sponsor of the American League Championship Series™ and the National League Championship Series™, the season-long “Home Means Everything” campaign also will be highlighted throughout the ALCS™ and NLCS™ games to celebrate loanDepot’s partnership with MLB and Boys & Girls Clubs of America. Specific celebrations will be finalized later in this season.

“loanDepot and our team members are very community- and philanthropic-minded,” said EVP, Chief Accounting Officer, Nicole Carrillo. “We have been a significant partner of the Boys & Girls Clubs of Central Orange Coast for many years, so the ability to partner our MLB efforts along with supporting Boys & Girls Clubs of America both nationally and in our local communities enables us to amplify our impact throughout the season.”

“We love the ‘Home Means Everything’ campaign because home really does mean everything,” said Frank Sanchez, NVP, Business & Community Affairs at Boys & Girls Clubs of America. “Home plate, home with your family, and, for our kids, going to their second home—their local Boys & Girls Club, where they can have a meal, feel safe and have fun with the high impact programs and opportunities we have to offer.”

Continued Sanchez: “The monies raised through this campaign will help enable our Clubs to provide exceptional programs staffed by caring professionals. These opportunities provide kids and teens with educational experiences that prepare them for life after graduation, and to find success in the future workforce. We’re going to have a lot of fun this year, following this campaign and keeping a ticker of how many runs have been scored throughout the season.”

“Boys & Girls Clubs of America has a huge footprint across the country, which provides us with great opportunities to work with our 30 MLB clubs,” said Jeremy Cohen, MLB Vice President & Group Director, Corporate Partnerships. “Through partner donation programs such as the ‘Home Means Everything’ campaign, donation programs and partner volunteer hours, we’ve been able to bring millions of dollars and hundreds of thousands of volunteer hours to help support local Clubs, Club and field renovations and mentoring activities.”

“loanDepot shares our values for making a positive impact in the community,” said Rocky Egusquiza, Executive Director of the Marlins Foundation and VP, Diversity, Equity and Inclusion. “And, as a nationally recognized brand, loanDepot is an ideal partner in the Miami market, not just to promote home ownership, but to help our local veterans and support our local Boys & Girls Clubs. It’s partnerships like this one, that are rooted in these philanthropic values, that make a significant impact for us, not just in the local community, but allow for sustained success for us as a team both on and off the field. loanDepot’s motto ‘Home Means Everything’ resonates with us because Miami is the home of the Marlins and we pride ourselves on being the community’s home team. We look forward to making an impact in the community with loanDepot.”

“This donation means the world to Boys & Girls Clubs of America,” concluded Sanchez. “It enables us to continue our work and support the mission of our organization, which is to change young peoples’ lives across this country. We couldn’t do it without partners like Major League Baseball and loanDepot.”