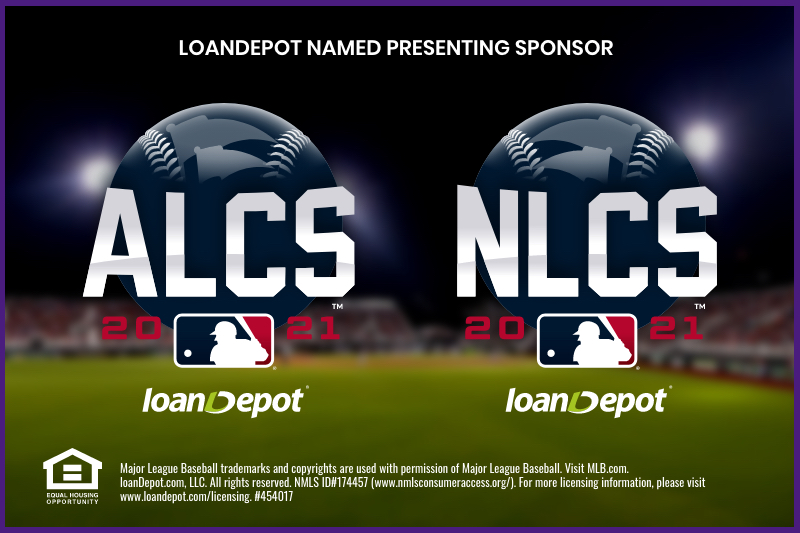 Major League Baseball today announced that new partner loanDepot, The Official Mortgage Provider of MLB, has been named the presenting sponsor of the American and National League Championship Series through 2025.

“We are thrilled to be partners with Major League Baseball and proud to be the presenting sponsor of the American and National League Championship Series,” said loanDepot Founder and CEO Anthony Hsieh. “Most importantly, we are proud to be giving back to the communities in which we live and work and are delighted to be providing opportunities for fans and families nationwide.”

Additional promotional aspects of the “Home Means Everything” RBI campaign will include highlights of the most exciting and game-changing RBI across MLB Network, MLB.com and MLB and Club social media platforms and channels, as well as highlights of behind-the-scenes moments featuring some of MLB’s most recognized names.

To celebrate baseball fans, loanDepot and MLB will present a free prediction contest called 2021 MLB Opening Day Pick ‘Em presented by loanDepot. Fans who correctly predict the winners of every Opening Day game are entered for a chance to win $200,000. Fans can sign up and make their predictions, beginning March 18th through Opening Day Eve, March 31st, at MLB.com. The MLB Championship Season begins with all 30 Major League Clubs playing on Opening Day on Thurs., April 1st.

“loanDepot is fully embracing our new partnership with fan engagement, involvement in MLB events and support of our official charity,” said Noah Garden, MLB Chief Revenue Officer. “The contributions loanDepot is making to Boys & Girls Clubs of America demonstrates our shared values and strong commitments to our communities. We are counting the days until Opening Day and loanDepot is leading us off with plenty of exciting activations.”

“On behalf of everyone at loanDepot, we are incredibly excited for Major League Baseball to return this spring and to count all the RBI on Opening Day and throughout the season,” said Hsieh. “At loanDepot, we know Home Means Everything, and we look forward to having fun with MLB fans through the Pick ‘Em contest and are proud to support Boys & Girls Clubs of America as players on all 30 teams strive to cross home plate each and every game.”