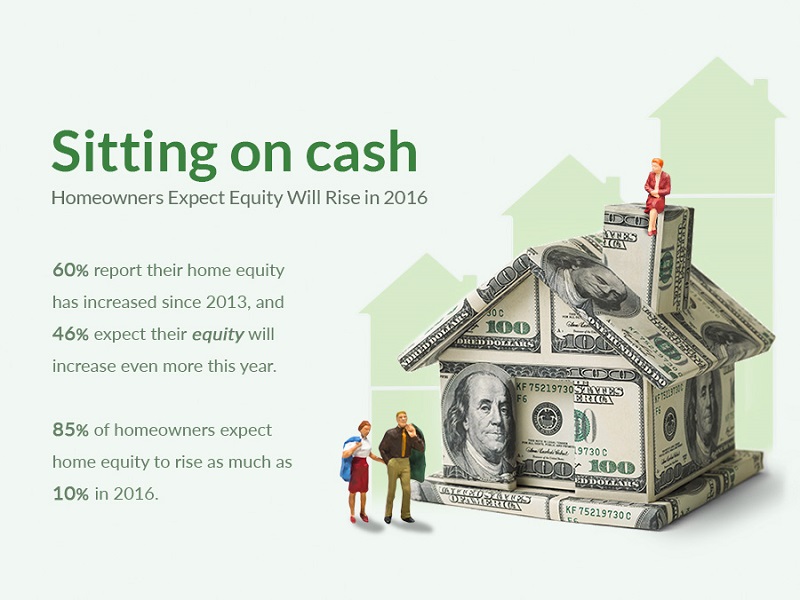 Not surprisingly, the differences in perceptions are driven by individual homeowner experiences. Homeowners who purchased their homes after 2009 expect to gain more equity this year, as compared to pre-2009 homeowners, (50 percent vs 32 percent). One explanation for this bullish outlook could be that these homeowners did not experience the same losses in value as their pre-2009 counterparts. Post-recovery buyers also believe that their homes have gained value since 2013—an outlook not shared with pre-recovery homeowners (64 percent vs 58 percent).

While both groups believe their homes’ value has appreciated in the past three years (57 percent), the majority (80 percent) underestimate the value their home has gained. Of the homeowners who believe their home values have increased since 2013, one in four (27 percent) believe it has between one and five percent. This contrasts with the Case Shiller 20-city index, which shows prices rising twice that much from November 2013 to November 2015. Additionally, nearly one in seven homeowners surveyed admitted that they did not know how much equity they would need to quality for a home equity loan.

For the 59 percent of homeowners surveyed who believe that they have enough equity to qualify for a loan, how they would use the funds varies on age and life stage. Top responses included home remodeling (39 percent), consolidating high interest rate debt or credit cards (29%) and saving for retirement (18%). These responses dovetail with projections from the Harvard Joint Center for Housing Studies, which anticipates annual spending growth for home improvements to accelerate from 4.3 percent in the first quarter of 2016 to 7.6 percent in the third quarter.

Homebuyers from both purchase timeframes are approaching home equity gains—and potential loans—with discretion, knowing that they may need to draw upon those savings in the event of an economic downturn. While more than half of those surveyed (58 percent) indicate that they have always been conservative about their home equity, 14 percent indicate that changes in the housing market over the past 15 years have made them more conservative about touching their equity. In contrast, nearly one in five (19 percent) said that they have no concerns about accessing their home equity as long as they stay current on their mortgage, and just over 5 percent do not believe keeping a high level of equity in their homes would enable them to sustain any bumps in the road.

*The survey was conducted by OMNIWEB using the KnowledgePanel™ in a national omnibus service of GfK Custom Research North America. The KnowledgePanel™ is the only commercially available online probability panel in the marketplace making the sample truly projectable to the US population, which sets it apart from traditional “opt in” or “convenience” panels. The survey is based on interviews conducted from January 15-17, 2016. Approximately 1,000 interviews were completed, with 500 female adults and 500 male adults. The margin for error on weighted data is +/- 3 percent for the full sample.