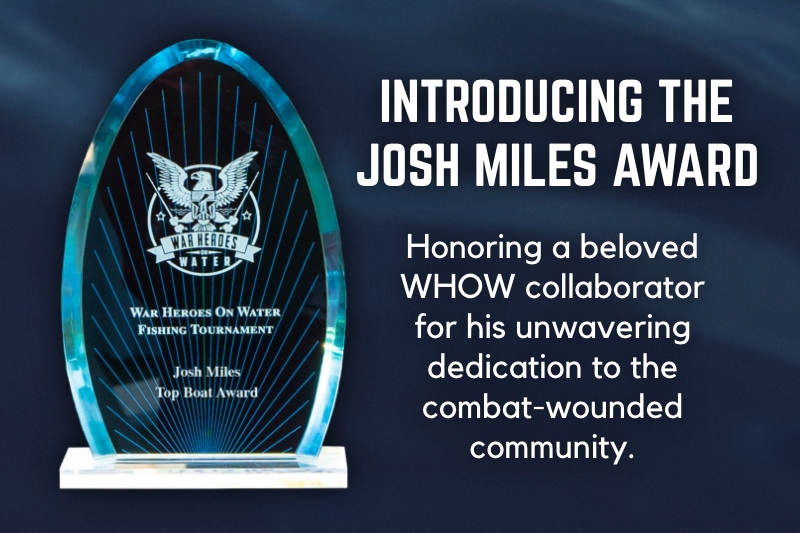 War Heroes on Water, created in 2018 by loanDepot Founder and CEO Anthony Hsieh to help combat-wounded veterans recover from the physical, emotional and moral wounds of the battlefield, today introduced the Josh Miles Award to honor the legacy of a beloved collaborator and colleague who passed away on October 18, 2021.

Said WHOW Tournament Founder Hsieh, “The world has lost a tremendous human being. Josh was an incredible man, and one of the heartbeats of the WHOW tournament. He selflessly helped us build WHOW brick by brick, year by year, because he truly loved this country’s service members. He gave of himself time and time again to ensure that as many veterans as possible could begin their journey of healing and he personally spent countless hours each year helping us ensure that WHOW could deliver on our promise of not only directly helping the veterans in our tournament, but also assisting thousands more around the nation via the funds we raise.”

The WHOW tournament, now the largest nonprofit sportfishing tournament of its kind in the United States directly served 100 combat-wounded veterans in 2021 and raised $1.4 million to support thousands more. The tournament fleet featured nearly 40 of SoCal’s finest sportfishing vessels, all donated by their owners in an effort to serve wounded veterans on their re-entry to civilian life through a multi-day on-water sportfishing experience. The unique experience not only gives veteran participants time to bond with one another, but to develop a critical support network that is vital to their recovery.

“In creating the ‘Josh Miles Award,’ War Heroes on Water (WHOW) is providing a beautiful tribute to an outstanding American,” said Freedom Alliance President Tom Kilgannon. “Josh served 16 years in the Marine Corps and earned the rank of Gunnery Sergeant, which was a dream of his. He fought in the 2nd Battle of Fallujah, and after retiring, found his purpose of helping his fellow combat veterans through events like WHOW and his work at Freedom Alliance. Josh loved WHOW and everybody associated with it. Freedom Alliance is deeply grateful to Anthony Hsieh and the WHOW team for honoring our friend with this award.”

Miles was director of military and charitable programs at Freedom Alliance, the tournament’s 503c partner.  His involvement with the War Heroes on Water tournament began in 2017, ahead of the tournament’s inaugural event. When presented with the tournament concept, he enthusiastically joined in the planning—confident that the tournament’s core tenet—to help bring healing to the combat-wounded veteran community—would be a resounding success.

Over the next four years, Miles became an integral member of the WHOW tournament family and an ideal collaborative partner. A veteran himself, Miles effortlessly balanced his supporting role with WHOW with his responsibilities at Freedom Alliance, focusing in both areas on supporting returning veterans as they transition back into civilian life.

The Josh Miles Award will keep the spirit of a beloved colleague and fellow brother in arms alive within the WHOW tournament family and with all of the veterans who participate in future tournaments.