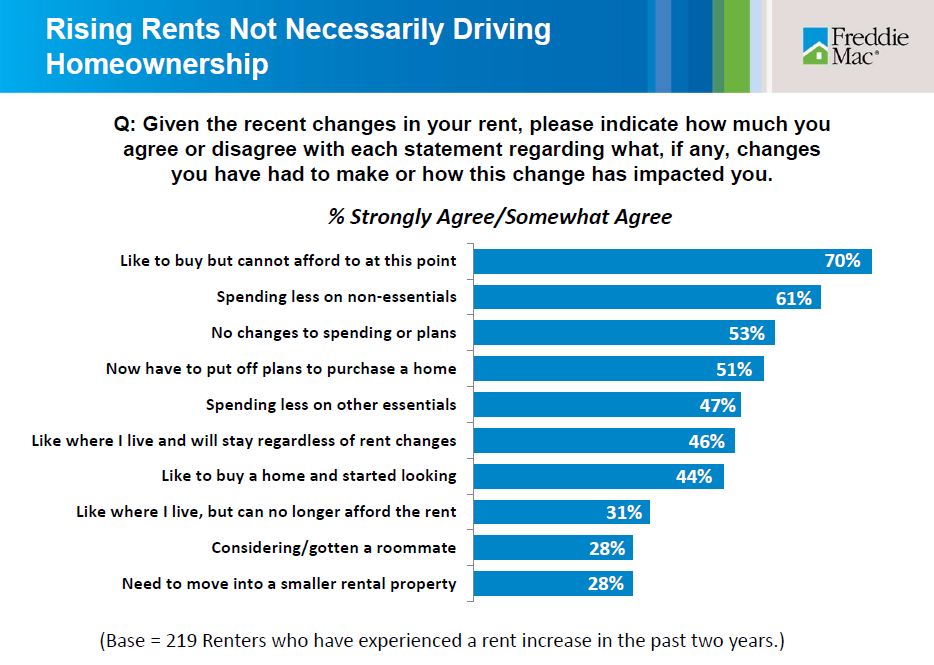 Freddie Mac released the results of a new survey, “Profile of Today’s Renter Multifamily Renter Research,” on May 18, 2015 and the results are somewhat surprising. They indicate that rising rents are not causing a direct effect on a renter’s decision to become a homebuyer. Despite the costs, many renters have favorable perceptions about renting and these are increasing, which is motivating them to stay put for the time being.

The Harris Poll, commissioned by Freddie Mac, was conducted between August 2014 and March 2015. More than 2,000 U.S. adults were surveyed online to get their perceptions about renting.

"We've found that rising rents do not appear to be playing a significant role in motivating renters to buy a home," said David Brickman, executive vice president of Freddie Mac Multifamily. "This contradicts what some in the housing market think as they expect more renters ought to be actively looking to purchase a home. We believe rising rents are primarily a sign of increased demand rather than a signal that home purchases will be increasing."

Rent prices rose 3.6 percent in 2014 and are projected to go up 3.4 percent above inflation in 2015. More than one-third of U.S. households currently rent their homes.

"Growth in the number of renter households is occurring amid an improving job market and economy,” said Brickman. “The demand for rental housing is increasing and an estimated 440,000 new apartment units are needed each year to keep up with demand."

The survey results show that 38 percent of renters who have lived in their home two years or more did see a rent increase and only 6 percent experienced a decrease. The remaining 56 percent stayed the same.

Right in the middle of those stats, however, are those who seem content with where they are, despite the rises in rents. Forty-six percent said they like where they live and will stay despite changes and 53 percent said they wouldn’t make any major adjustments to spending or plans.

Despite the already high and rising rental market, a third of renters responded that they are “very satisfied” with their rental experience and another 30 percent said they are “moderately satisfied.” What are the factors that contribute to this? The three major positives for renting are relatively consistent across generations: freedom from home maintenance responsibilities, greater flexibility over where you live and protection against declines in home prices.

Baby Boomers led in all these reasons, but generations X and Y were close behind. Ninety-two percent of Baby Boomers said that freedom from home repairs was a favorable factor about renting, compared to 75 percent of Millennials (gen Y). Flexibility about where you live was close to even, with 79, 78 and 83 percent rating it favorable by Millennials, Generation Xers and Baby Boomers, respectively.

How are people adjusting or compensating when their rent is increased? Sixty-one percent said they were cutting back on spending for essentials or nonessentials, 28 percent are considering getting a roommate or moving into a less expensive rental property, and 31 percent of renters whose rent increased in the past two years said they like where they live but can no longer afford the rent.

RELATED STORIES
New consumer protections coming to mortgage industry this summer
Why you should get pre-qualified before house hunting
Homebuying: Tips for a smooth closing
Lack of inventory chases away house flippers
Tax deductions every homeowner should know