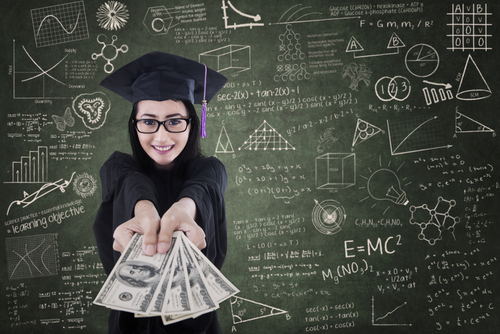 In many ways, the life of the modern Millennial appears to be somewhat of a glory era.

Advanced technology at their fingertips has created a society of instant access, gratification and learning. iPad, iPhones and iPods are in every hip pocket, conduits to a bigger world that no one a generation ago could have imagined.

But Millennials and those a bit older also have a serious problem: student debt is at an all-time high, and the outlook is not nearly as clear as the screen on the new iPad 6.

On one hand the sky’s the limit when it comes to learning opportunities in the real world. But on the other hand, this generation is wrestling with some of the same financial challenges as their parents – only far worse.

Student loan debt has reached a whopping $120 trillion, and the average student carries anywhere between $30,000 and $50,000 in debt after graduating college. The amount of student loan debt has more than doubled since 2007, according to the Federal Reserve.

Economists believe that one of the factors contributing to student loan debt is an overall decline in household wealth after the recession in 2008. With less money from mom and dad to pay for school, students opted to borrow more, which has lifted the cost of education.

Here’s your degree, now you have to spend the rest of your life paying for it.

The risks of carrying extra debt in your bank account are a lot like carrying extra weight on your body. It will slow you down, depress you and ultimately put your career at risk.

So what’s a well-intentioned millennial supposed to do? Well, don’t bury your head in a pillow or the sand and hope it goes away. That never works. Like any problem, as intimidating and daunting as it may be, the best way out is to create a plan, and do your best to make it happen.

The best way to pay off your student loans is to start early, and pay as much as you can afford through a repayment plan, according to Federal Student Aid, an Office of the U.S. Department of Education.

People should develop a repayment plan that works for them. According to Federal Student Aid, graduates should choose one of the several payment plans available. The Standard Repayment Plan allows you to pay off your loans in 10 years, but other plans exist to pay sooner or later.

Some payment plans can be based on your monthly income to ensure that you can always afford to make a payment, without it gutting your ability to pay your bills. It is also encouraged to consolidate your loans, so that you can begin to pay down all of it.

Everyone agrees that the worst thing you can do is put off your student debt or ignore it. The debt will mount and lead to delinquencies that will cost much more in the long run.

Whether it’s a government or private loan, lenders often give grace periods right after one leaves college or graduates. During this time, the federal government urges people to pay as much as possible to bring down the principal. It’s also important to continue to live meagerly, and avoid the temptation of overspending on the assumption that your will get a high-paying job in the workplace.

Regardless of one’s major, one of the best lessons learned in college is how to plant and follow-through on your commitments. That message should carry over afterward.

A new graduate should tackle student debt head on. Consolidate your loans, create a payment plan, stick to your plan, and live like you were still in college. Don’t pay your college loans via a credit card.

Unlike the instant fix of a smart phone or mobile device, graduating from college, and enjoying its rewards, is a slow burn that requires commitment, patience and planning to pay off that ever-mounting student debt.