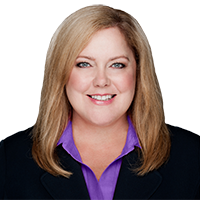 Belinda,
Thank you to you and Nick and all at loanDepot that made this happen. I am sure I have no idea what this took, but what I do know is that if it were not for you, it would not have happened. I am so very grateful that I put my brother and sister-in-law in your very capable and persistent hands!!! Thank you is not enough; however, I thank you!!! You’re the best.

As first-time homebuyers, we were already feeling unprepared and overwhelmed when we started the home search process. When we decided to purchase new construction, well, we were really trying to make things hard on ourselves. We found the home of our dreams, but then had to answer the question ‘how do we pay for it?’ The loan process was completely foreign to us, and so upon being presented with a builder preferred lender and an incentive to use them, it sort of seemed like a no brainer. But the months ticked by and no one from that lender ever reached out to even say ‘hello.’ We always look to work with subject matter experts as partners, and communication is a big part of an effective partnership, so I began my hunt for a lender that would do more than just say ‘hello.’ We found The Stowers Team and loanDepot. We reached out to them via email and within hours they called to set up a meeting, and just a couple of days later we met with Belinda and Ron Stowers in their office. I immediately felt at ease upon meeting with them – there was no attempt to sell us on anything, but rather, it felt like we were getting a much needed course in all things home loans. I knew they were the right partners for us upon leaving and felt such relief. After that initial meeting, we continued to call and email with question after question which they always answered quickly and kindly. Once we told them we wanted to move forward with them, they added the next member to their rock star team to help us…Penny Ong-Conley. As our dedicated Loan Specialist, it is not an exaggeration to say that for months we traded an email or a call with the Stowers Team every single day. They were always patient with our questions, sent detailed explanations, set realistic timelines for when to expect what and never wavered in top notch level of service. Along the way, The Stowers Team also gave us guidance on ways to increase our credit score for a more favorable rate, sent us market information to assist with the all-important ‘lock strategy’ and even sent a handwritten card to say ‘thanks.’ With all the craziness and stress of buying and building a home, moving to a new city, and more, I can honestly say that working with loanDepot was the easiest part of the whole experience. I would gladly work with The Stowers Team again and wouldn’t hesitate a second to recommend them to any friend or family member looking for a great lender!

Belinda is a mortgage and real estate leader skilled in all aspects of management, sales and client services. Her direct involvement building profitable businesses in an industry defined by the customer experience has given her keen insight into the strategic approach that ensures successful and long-term relationships for loan consultants, their business partners and their clients.

Belinda’s career in the home ownership sphere spans nearly two decades, claiming Rookie of the Year her very first year as a real estate agent. She quickly rose in the company ranks, taking on leadership roles at both local and regional levels, and ultimately increasing her key real estate office’s annual closed volume sales from $7 million to $419 million in less than three years. This exponential level of accomplishment is credited to her perseverance as an agent who worked tirelessly matching homebuyers with the right property, and later as a CEO who built and mentored a team of equally motivated individuals.

Years of strategic market growth in the real estate industry translated seamlessly into the financial sector, where she leverages her knowledge as a home-buying expert to be a truly resourceful home-mortgage expert, fulfilling loans and developing the loanDepot Chula Vista branch with the same tenacity that motivated her successes 5, 10, or 15 years ago. Belinda strives to make every professional relationship and loan funding a meaningful, memorable experience.